(Note: This piece was originally published on the VRV Blog. However, as it appears the blog is now down, I’m cross-posting it here.)

It’s generally agreed that the origins of the BL (boy’s love) subgenre of manga can be traced back to the influential Year 24 Group, a loosely classified group of female shoujo mangaka who revolutionized the scene. It’s also generally agreed that the two “canonical” works of BL made by members of this group are Takemiya Keiko’s Song of Wind and Trees and Hagio Moto’s Heart of Thomas. BL is a twisty, self-contradictory genre almost by definition—the entire premise is essentially “male homosexuality for girls”—with a lot to unpack, and these early works only double down on the complexity by the ways in which they racialize their protagonists.

Both manga are set in heavily romanticized versions of 19th Century Europe—France in Song, Germany in Heart—and revolve around the romantic tensions of students at all-boys schools. The vast majority of both casts are drawn with blonde hair and blue eyes, in the classical image of a foreigner in the Japanese visual lexicon. The exceptions are the protagonists, both of whom have dark hair and eyes. And it’s not a simple matter of visual distinction, or even giving the—presumably dark-haired, dark-eyed, Japanese—audience a character they can visually relate to. No, they’re deliberately marked as outsiders within the already foreign setting.

Serge, the protagonist of Song of Wind and Trees, is the child of a fallen nobleman and a gypsy prostitute, marked by his dark hair and complexion and often a target of discrimination because of it. Despite being on the receiving end of comments like “With skin like that, you’re a half-breed, right?” Serge never gets upset or frustrated with this treatment—instead, he simply wins people over with his skills and good nature, and neither he nor any of his friends show signs of internalized racism. On top of that, his “exoticism” is occasionally fetishized, like when his mother is described as “burning with the beauty of her passionate gypsy blood.” Basically, Serge is a classical example of a model minority, and the bigotry shown towards him is—for the most part—just used to provide him an opportunity to impress. Not exactly an in-depth examination of race relations.

Julismore, the Greek-German protagonist of Heart of Thomas, is handled in a similarly superficial way. His ethnicity is a much more minor element, and used mostly as fetishized exoticism. There are many, many admiring comments made about his “lovely dark hair,” and he’s even described as “[carrying] with him the scent of Mediterranean flowers.” At the one point in the story where discrimination towards Julismore is directly addressed—when he goes home with another boy, who overhears his grandmother lamenting his appearance—Julismore just explains that he plans to work as hard as it takes so “meet the standards of a fine young man and a true native of Deutschland.” Another model minority.

There’s a lot going on in these stories. Firstly, the BL genre as a whole is complex in its stylized depictions of male homosexuality for primarily female audiences. You could write a book on the psychology underpinning this dynamic—several people have, in fact—but one common argument is that BL is a popular genre because it allows heterosexual women to experience relationships without gendered power dynamics. It’s complicated, because BL is an entirely separate genre from work by and for gay men—the latter of which is a much smaller market.

The debates around BL are too involved to get into here, but it’s hard to deny a certain amount of projection onto exotic “others”—that is, feminine gay boys. In Song and Heart specifically, there is the additional element of the 19th Century European setting, which would itself be delightfully exotic as far as the 20th Century Japanese mangaka and presumed audience are concerned. In comparison to the rapid modernization of postwar Japan, historical France and Germany would have seemed like beautiful fairy-tale kingdoms. All of this is used, consciously or unconsciously, to create a divide between the readers and characters that allows them to enjoy the romantic fantasy as an escape from patriarchal heterosexual relationships and governmental pressure to bear children.

And then we have the extra layer of in-text othering, which increases the complexity even further. In Song and Heart, the characters who would bear the most resemblance to the readership are the ones marked as outsiders. Naturally, there’s a whole laundry list of ways you could read this, ranging from reductively simple to unnecessarily complex. Occam’s Razor suggests it’s a coincidence, with the protagonists simply given traits that would make them stand out from the rest of the cast and seem exotic to the reader the same way they would to the other characters. Or you could make a case that the protagonists’ assumed resemblance to Japanese readers is to give said readers someone they can easily relate to visually, as a way of inviting them into the fantasy.

But even if Serge and Julismore do look more Japanese than they do European—at least compared to the rest of the casts—there’s a lot more to representation than just appearance. It’s hard to imagine a Japanese schoolgirl in the Meiji era having much firsthand experience of racial discrimination.

Taking all of this into account, what seems to be going is yet another tier of play with othering and identification. On top of the romanticized inversions of gender, sexuality, and culture, readers are invited to see themselves as exceptional, in the same way as in many Western young adult novels. Dark hair and eyes aren’t the norm; they’re exotic and alluring. Even the depictions of discrimination can be read this way, allowing readers to live out the powerful fantasy of gracefully showing up anyone who disparages them. 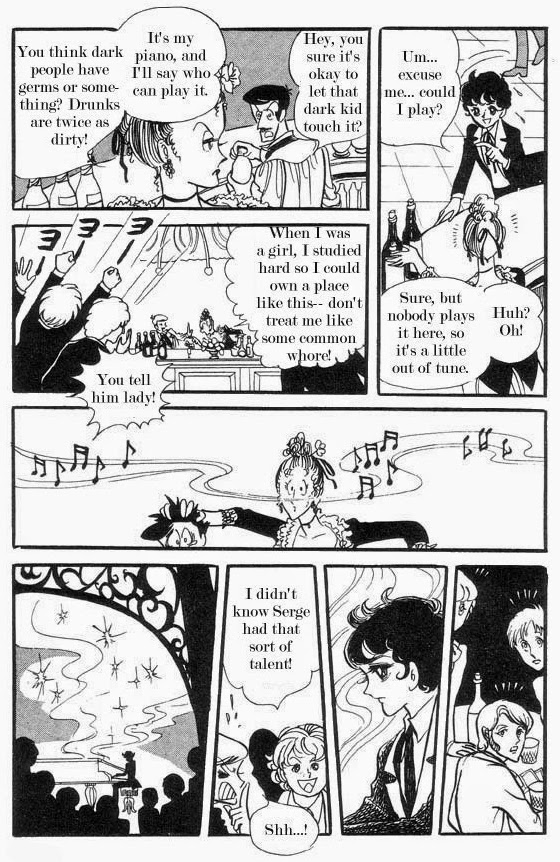 Heart of Thomas and Song of Wind and Trees are not light, fun escapism—they both feature death, mental illness, and sexual abuse—but they are fantasies, beautiful daydreams of lives where even suffering is poetic and profound. The depiction of race serves to add another layer of fantasy for the reader to engage with if she wishes. Their romanticization of racial discrimination and otherness is complicated, in the same way that the BL genre’s projection onto male homosexuality is complicated. But that’s just it—we shouldn’t dismiss these stories as hopelessly problematic or brush off any criticism with the defense that they are simple fantasy. Instead, we should take them seriously and thoughtfully, enjoying them even as we acknowledge their flaws.